We’ll! It’s been a while again. Time to catch up…

We did the standard tour from Chile into Bolivia via Jeep. This meant that we got picked up early, waited in line with a lot of other travellers from other tours to get our exit stamp from Chile, then drove under and hour to wait in another line to get our entry stamp for Bolivia. The border here is quite high up and since it was still quite early, it was also really cold! But obviously there are the usual suspects in shorts and flip flops. 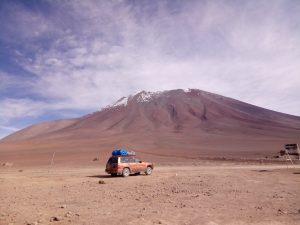 Once all the formalities were done, we got split into groups of six and assigned to jeeps. Our group consisted of a brother and sister from Spain, two South Korean ladies who spoke no Spanish and only very limited English and us two.
On the first day, you pass a few lagoons, some hot springs and some geysers: 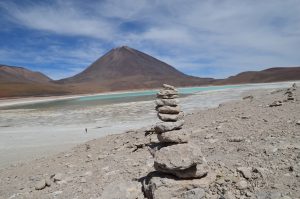 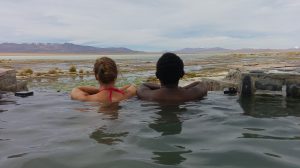 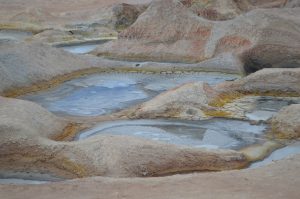 Night is spent at an altitude of 4500ish metres and that really messed with my head. I had a pounding headache to the point where I went to bed at 8pm and actually woke up at night because my head was hurting so much. Oscar got up at some point to go to the bathroom and came back warning me to not get up as quickly as normal – very easy to faint from the headrush I think.
Next day was a bit better, plus we were going to spend the night lower down (something to look forward to!). We passed some impressive stone formations, lagoons full of flamingoes, and a llama herd that day: 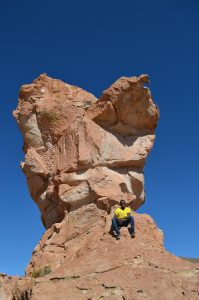 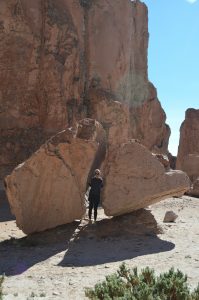 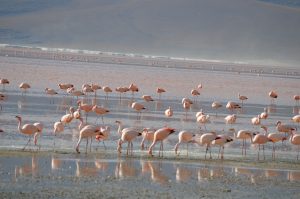 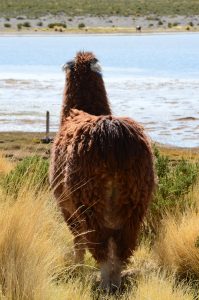 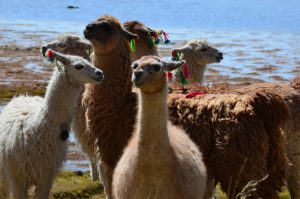 The second night is spent in the salt hotel, which is a bit outside the salar (no hotels allowed in there anymore) but has walls and floors made out of salt. We managed to explain and play some card games with our jeep team at night, in spite of the language barrier (reminded me of holidays when I was little :). 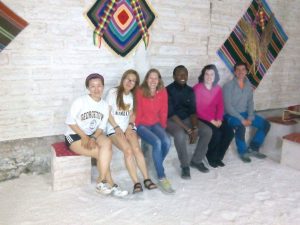 Day 3 is the big day – got up at some ungodly hour to be taken into the salt flats for sunrise. Great for pictures, not so great for shoes – a layer of water a few cm deep on top of the salt soaks into everything. 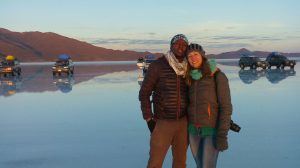 After sunrise, we drove to Isla Incahuasi for breakfast and more pictures (no water here, fortunately, so our shoes had a chance to dry). Then on to the middle of the Salar for some classic dinosaur/ other prop pictures! They may be cheesy, but we had fun. And obviously being in the middle of the salt flats is amazing – brilliant white wherever you look… 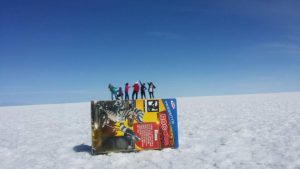 We finished around 3pm with lunch in Uyuni. We took one look at the city and decided that we didn’t need to stay here for the night – there is not a lot to do. So we joined the group from one of the other jeeps (there were 3 jeeps in total) and booked bus tickets to Potosí for the same afternoon.
There were 9 of us, so we had a fun bus ride through absolutely stunning scenery (unfortunately it got dark at some point). 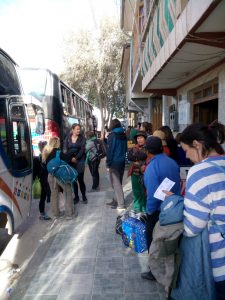 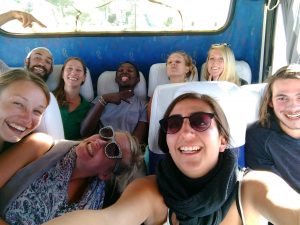