We now had only 5 days left before we had to drop off the van in San Pedro, over 1200km away. So on the day after the match, we wanted to get to the Elqui Valley for some star gazing and a tour in Mamalluca observatory.
By the time we had packed up all our things, said our goodbyes and were ready to go, it was nearly 2pm and we had a good 6 hours of driving to do. The observatory tour was to start at 8:30pm, but we had been told to get there for 8pm and buy our tickets. We were doing well for time, the motorway wasn’t too busy when everything suddenly stopped… A lorry had slid sideways after a bend and was now blocking every available lane going north. After a little while of just waiting, we saw some cars go back a little bit and take a side road. We followed some of them to the top of a hill, where an ambulance was parked saying it was very steep and narrow and they would not be going further. A line of cars formed while people got out to look at the road, deciding whether to take the risk… In the end, we decided to give it a shot. It wasn’t the steepest we’ve driven down on this trip, but this was mainly sand and there were two really, really narrow bends were it felt like we could just slide off the side any second. But we managed to get round at snail’s pace and I’m sure once the van appeared on the other side, some more cars were encouraged to try!
We joined the (very empty) motorway again a bit later, but were by now running​ late for our tour. For the rest of the afternoon, we caned the van down the motorway at 130/140 km/h and then overland to Vicuña as fast as we could. The guys in Santiago had tried to call the observatory for us, but nobody had picked up. We got to the ticket office at 8:39pm and thank god, the group had not left (they were still loading people into vans). So I very quickly bought our tickets and then we followed the tour bus up the hill and got to do our tour.
It’s a shame it was nearly full moon, as it meant that the stars were not as visible as normally in that area, but our guide clearly loved his job and kept us entertained and informed for 3 hours while we waited our turns on the telescope to see different stars. He also took pictures of the moon on everybody’s mobiles through one of the weaker telescopes. 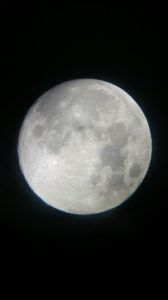 Unfortunately, getting there late had meant that we didn’t have time for dinner in the village, and when the tour find ished at 11:30pm we couldn’t really be bothered anyway, so we just had some biscuits before bed.
The next day was nothing but driving again, 7 hours to a national park where we planned to stay the night. No accidents this time, at least! We spent the night on a parking lot by a beautiful beach and enjoyed the full moon. 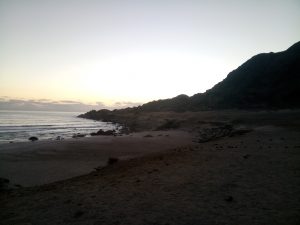 More driving the next day – we had another 650km to cover. We decided to camp in the Valle del Arcoiris (Rainbow Valley) a bit outside of San Pedro. We got there late, in the dark, swearing about the state of the road. But how it was worth it, because this was the view in the morning: 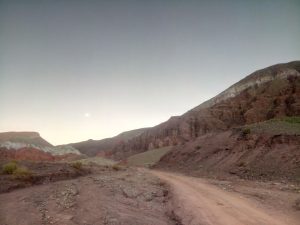 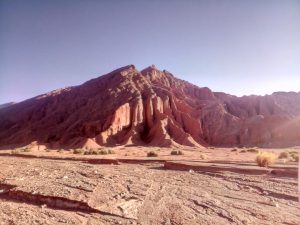 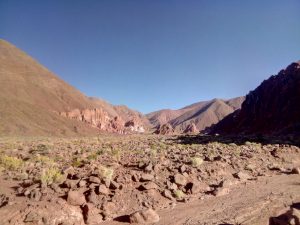 We visited the Valle de la Luna during the day, as well as book a tour from San Pedro to Uyuni in Bolivia for Friday (we’re dropping the van off on Thursday :(…). 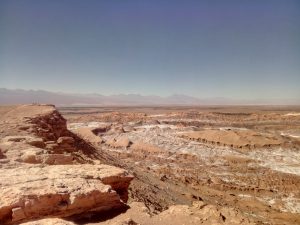 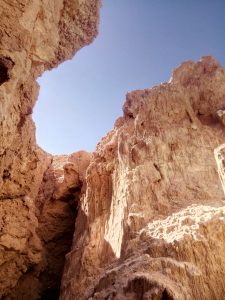 Our last night in the van we spent near Laguna Chaxa, where we had watched the sunset and some flamingoes. And of course, because it was the last night, we got stuck in the sand! Fortunately, some other visitors and the park guides helped push us out 🙂 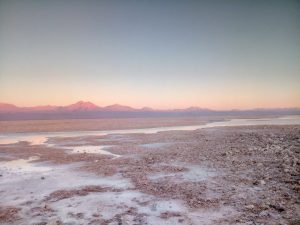 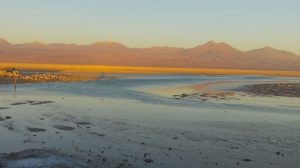 So! It looks I’m finally, for once, up to date. We’re currently in San Pedro, watching Manchester United play Anderlecht; we’ve already exchanged money and done our shopping for tomorrow  (leaving at 7am); we can pick up our washed clothes this evening… Now all that’s left is get Oscar a hat (I’m trying to convince him to get a traveller fabric one – the woven kind that many hippie travellers seem to favour ;). Until next time from Bolivia!