We drove all the way to Pucón that day. It’s a strange place full of German stuff – there’s a German bakery, Omas Café, Kuchen on sale everywhere…
I was very tempted to try and join a tour to climb volcano​ Villarrica, but the weather was bad and it was also rather expensive. Instead, we decided to follow another tip the Canadian couple had given us and go to one of the many thermal pools in the area. The one we were heading to allowed you to also camp there. It was a good 2 hour drive from Pucón up the mountain on narrow gravel roads. Early on, we were stopped by an elderly farmer on his way back from the a Sunday drink and shopping, so we gave him a lift. Unfortunately, I could hardly understand a word he was saying! But I did get that after we dropped him off, he still had to do a 1 hour walk to his actual house… A bit later we picked up another old man about 10km from his home (people really do walk far!) and dropped h off in front of his house. We got invited for tea if we passed by the house again ;).
It was a pretty grey and rainy day, and once we finally reached the termas, it was amazing to sit in the hot pools. We must have spent 4 or 5 hours just sat in the warm water while it rained occasionally. 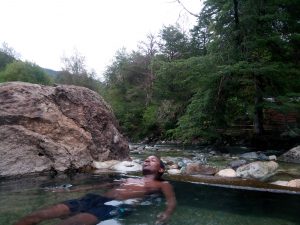 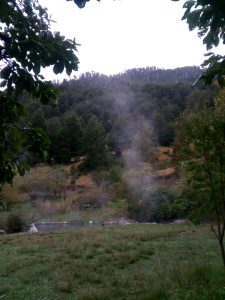 When we finally got out, we just cooked some food and went to sleep (not that there was anything else to do! We were the only people staying overnight). Next morning, we jumped back in the pool to wake up (there are showers as well, but they’re cold – i don’t think anyone ever used them) and then started on a few hours of driving.

Our first stop was a vineyard in San Javier, where we got a very interesting and private tour and of course a wine tasting (but unfortunately it was my turn to drive…). 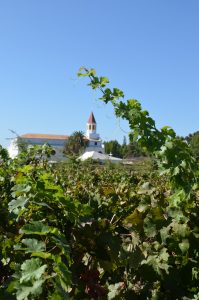 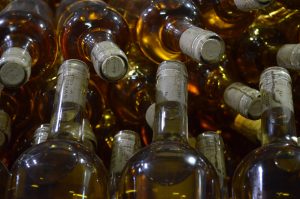 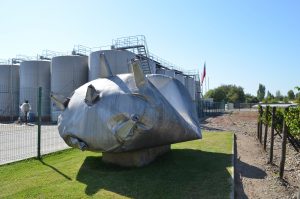 (This is what earthquakes do to wine tanks…)

We then headed for the coast in Constitución and from there on to near Pichilemu. We stayed near a semi-private beach and had an awesome view of the sea and sunset. 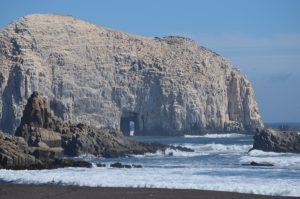 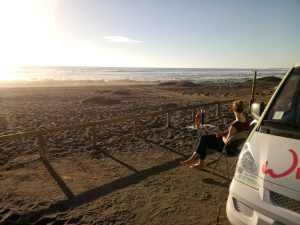 A few people working in the hostel nearby joined us for the sunset and later invited us to a little bonfire on the beach. We had a spare day before we wanted to reach Santiago, so decided to stay in the area for another day. One of the people at the hostel was planning to go to Santiago as well, so we arranged to give her a lift the day after.
We spent a relaxed day checking out the market in Pichilemu and trying to find a particular kind of meat for Oscar, as he was planning to cook dinner on the fire that night. Once we’d finally found it, we watched surfers for a bit and then headed to our spot. The sky was so clear in that area that we had a really good view of the milky way and we just sat by the fire until midnight. 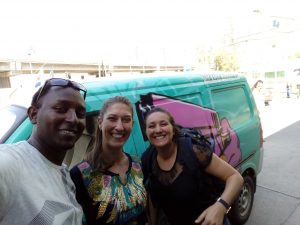