We arrived around 7pm and had a bit of trouble finding our accommodation (the place looked like a normal house, so I decided it couldn’t be it). Our first meal in Chile was the biggest steak we’ve ever seen (for Oscar) and a mixed lasagna (for me), either of which would have fed about 3 people. Oscar almost cried at his inability to finish his steak :).
The next morning was the big day to pick up our Wicked Camper! I’d been looking forward to having a car and being able to drive and stop whenever we want to. We got dropped off by a taxi driver with plastic sheeting for a window. The first van we saw had “Femme Fatale” on the side and Oscar said “This better not be ours”. But of course it was :). 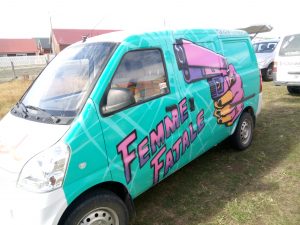 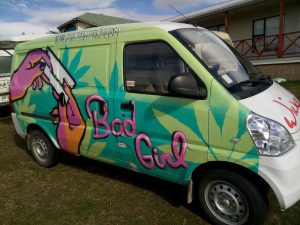 Alejandro, the person responsible for Wicked vans in Punta Arenas, took a lot of time to talk us through everything. We were planning on buying sleeping bags but there was a shelf of free stuff that other people had left, which happened to contain two sleeping bags, pillows and a woolly blanket (and since we have silk sleeping bag liners, we were happy to take them!). We were off! Straight to the supermarket where we spent the next 3 hours stocking up. Our first purchase was a Chilean SIM which, a week later, has only worked properly once. Oh well!

We decided to spend the first night south of Punta Arenas so we could test everything before actually setting off. We headed off towards Fuerte Bulnes and got lucky an hour into our drive along the Strait of Magellan – three dolphins playing in the water not too far off the coast. The drive took us through a number of small villages and past old fishing boats and we got a first taste of the gravel roads that you find in many places in Patagonia. Having reached the fort too late for entry, we continued on until the end of the road to reach the “southernmost lighthouse of the Americas”, San Isidro. Unfortunately, it was really late once we got there, so we decided to park up for the night rather than walk in the dark. We chose a nice location by the Strait close to a fisherman’s hut and tested the gas cooker and bed. Our new sleeping bags and blanket kept us quite warm and it was comfortable enough that we slept in until 10am!
We then went back to Fuerte Bulnes and explored the reconstructed fort there. Unfortunately, due to recent puma sightings, a lot of the walks were closed… 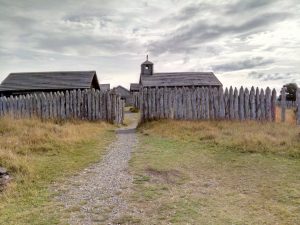 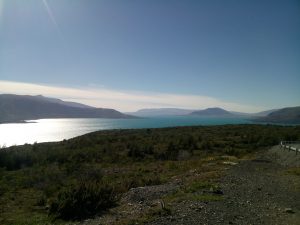 On our way past Punta Arenas, we picked up some more provisions and petrol (there are not a whole lot of petrol stations down here, so you’re recommended to fill up whenever you can) before continuing on to Puerto Natales. While looking for place to park up for the night, we drove past the Greenpeace ship ‘Rainbow Warrior’, which had apparently arrived the day before.
We spent the night on a parking lot near the sea, next to a French family who had been stuck there for a week due to issues with their van. Hopefully that won’t happen to us! 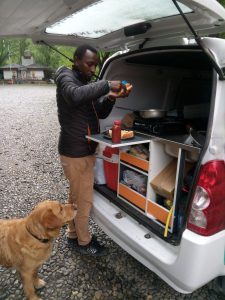