We wanted to visit Salvador because it is the centre of afro-brazilian culture, the former capital and birthplace of Capoeira. The road from the airport was lined with bamboo arches and we drove past what seemed like a new railway system. Like São Paulo, the outskirts of the city seemed to go on forever, with high risers as far as we could see.
For the first two nights, we stayed in a Pousada near the touristic centre of Pelourinho, full of old colonial houses in various stages of (did)repair – Salvador does not seem like a very rich city…
Close to where we stayed was an old fort, which now houses a number of different Capoeira schools.

Oscar was very excited to find out that Michael Jackson’s “They don’t really care about us” was filmed on one of the squares in Pelourinho, in collaboration with the Oludum drum school. 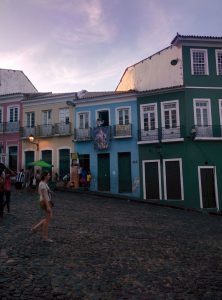 On our second evening, as we left for dinner, we bumped into our French neighbours from the Pousada and they invited us to join them and some friends for dinner and we got to taste Moqueca (a sort of sea food stew with coconut milk).
We moved to a hostel closer to the beaches the day after (recommended by a German couple we had met in Florianopólis). On a walking tour, we met two Austrian friends (who we later discovered​ were only 19 and had just finished school!) and spent the evening and the next few days with them. Dinner that night was eventful – a taxi stopped in front of the restaurant where we were sitting because its gas tank in the trunk was leaking. Everyone sitting outside jumped up from their meals and hurried inside, while the driver tried to fix the leak (he didn’t manage and just let it all stream out in the end). Our first night in the hostel was also interesting as apparently they had double booked Oscar’s bed (but fortunately he was the first one in there, so the other person moved her stuff (loudly!) in the middle of the night.
The next day we checked out some of the beaches with the Austrians (they were alright, but unfortunately full of rubbish) and watched the sun go down by a lighthouse. In the evening, we joined a group of people from the hostel for drinks at the beach and found out that a number of them would be in Rio for the carnival as well. 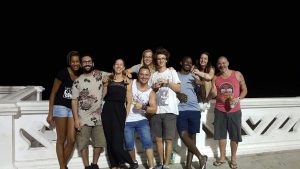 On our last day, we went into Pelourinho with some guys from the hostel as there was live music in various places. For some reason, we all ended up buying touristic t-shirts at some point during the day and formed a group of super tourists for the rest of the day… 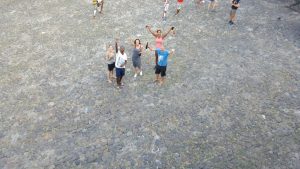 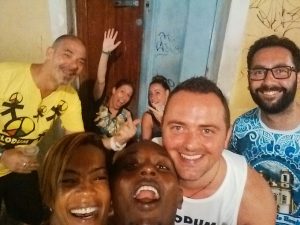 We now had five days left before Rio Carnival and had decided to spend these relaxing by a proper beach. So we flew back to Rio and then caught a bus to Arraial do Cabo, about 3 hours north.