Our friend Lene used to live in Floripa and she sent us a long list of things to do there – it’s a cool city half on the mainland and half on the island of Santa Catarina.
We wanted a few days to just chill at the beach and do nothing, because we felt a bit tired at that point… So we got ourselves an Airbnb in the centre for two nights (excellent choice of location this time!) and spent the day watching football and going to a Couchsurfing event called “Dinner with Strangers” in the evening. It was pretty cool – everyone paid a certain amount and brought their own drinks while two chefs made some really nice Lebanese food. The people there were a mix of Florianopólis natives, people working in the government there, tourists from other areas of Brazil… and us. Oscar has been saying that he wants to try and organise something like that when we’re back… Could be fun if it works out 🙂 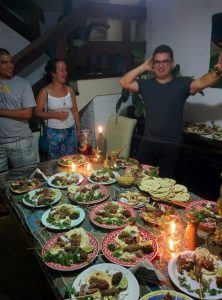 The next day we spent just chilling and watching Netflix, with an excursion for some food in the evening.
For the rest of the week, we decided to move a bit closer to the beaches (of which there are many) and booked a hostel in Lagoa da Conceição, which is a big lagoon with a little town centre near it, full of shops and restaurants. At that point we’d also worked out the public bus system (there are not a lot of signs so it often involves asking the bus driver where they are going…).
Anyway, we were very lucky with the hostel – staff and guests were all really cool and we spent the evenings chatting and playing cards. So Oscar finally got a nice hostel experience :). One day we hiked to a remote beach called Lagoinha do Leste with our dorm neighbour from Germany (we’re everywhere). It took two hours to get there and another to get back to an area where we could catch a bus, but was totally worth it. The beach was nearly empty when we got there. 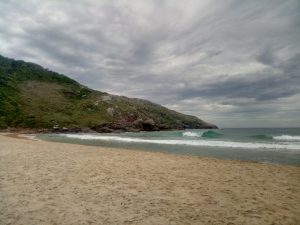 On the way home, we stopped in a restaurant by the beach from Lene’s list – it’s full of little notes from people all over the world. 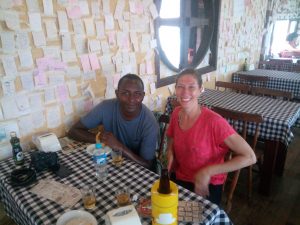 I’m super sunburnt here from the day before, but I’m glad to say it got better quickly… 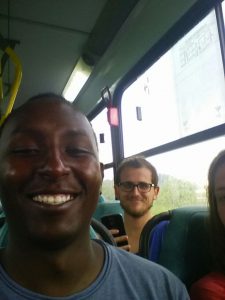 Oscar’s clear highlight was the BBQ prepared by one of the hostel guests (a chef from Norway) and the staff one night. He has since been telling everyone about the slow-cooked ribs they made (ask him, I dare you. Or has he told you already?).

We got a bit caught out with high season in Floripa and had to move to a different hostel for the last two nights, which wasn’t as nice and made us think that we really had to plan ahead a bit more. So we booked the next two weeks ahead and it took quite a long time to get it all sorted… and then we got it a bit wrong too :).